How to run Python serverless applications on the Google Cloud Platform

I've used the Google Cloud Platform extensively in the last years and, as a cloud platform, is one of the most enjoyable you can work with. It really helps you focus on what matters, whether you are building an MVPs, a data ingestion pipeline, a single function or full-fledged style application.

Let's focus on the serverless offer and discover how you can run Python serverless applications on top of GCP.

There are 5 different ways in which you can deploy a Python application on GCP:

What does serverless mean in this context?

Before starting: configure the gcloud sdk

We are going to use the gcloud sdk, so it's better to have it setup properly:

App Engine has two versions, standard and flexible environment, here we are focusing on the standard version.

If you are a fan of Heroku, App Engine is the closest experience you can get inside GCP.

You need an app.yaml, a requirements.txt and then you are ready to go.

There's a repository with a runnable example, with a few things to notice:

The app.yaml needs at least two entries: runtime and entrypoint.

App Engine supports both Python 3.7 and Python 3.8, so you can select the runtime you want to use.

The entrypoint is the command that you want to run (like web in a Heroku procfile).

Just wait a couple of minutes and your application should be running online. Pretty neat, isn't it?

I run some load tests using hey with 5000 requests (hey-n 5000 URL) and I got some really nice numbers. The application is not doing much, so I am basically testing the overhead of the GCP infrastructure

It's also nice to see how the number of instances scales up and down. 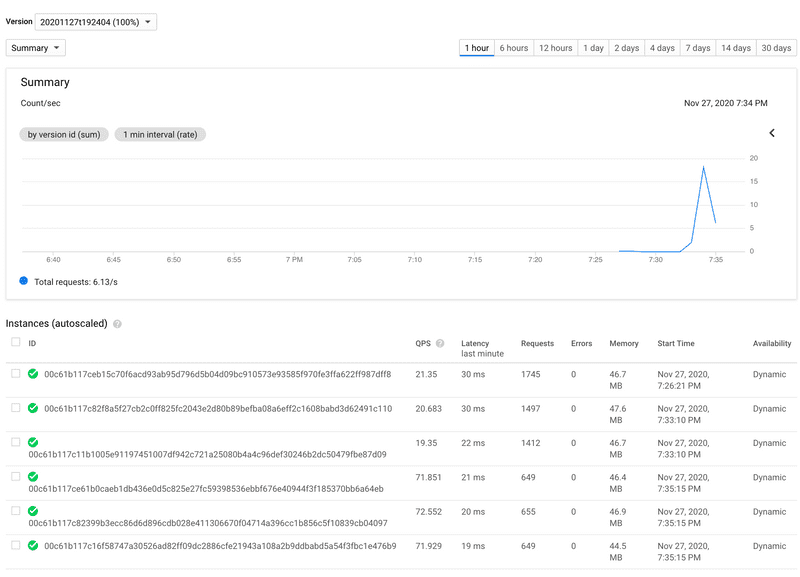 Cloud functions are the closest thing you can get inside the GCP ecosystem to AWS Lambda, with a key difference:

Google recently announced the GCP API Gateway, now you can have the AWS Lambda & API Gateway experience also on GCP.

You can trigger Cloud Functions with events (Cloud Storage, Pub/Sub, etc...) or by calling them directly.

Let's deploy a cloud function, you can find a runnable example here.

There is one main requirement: you need to have a requirements.txt and a main.py on your base path

Cloud Functions triggered by HTTP are based on Flask handlers, so our function receives a request object and needs to return something compatible with make_reponse.

Performance wise they are also good

Cloud Run is a recent new addition to the serverless GCP suite, it uses knative to run serverless workloads on top of a Kubernetes cluster.

That means you can run Cloud Run on your GKE cluster or on a cluster managed directly by Google.

In case you want to play with Cloud Run you can find (another) runnable example.

To deploy an application on top of Cloud Run you only need a docker image that can be pulled by the Cloud Run service.

It can be a publicly available image, or an image hosted on the GCP Container Registry.

In my case I decided to use the GCP Build service and push the image to the GCP Container registry.

After you cloned the repository you can run this command

This command will build and push the docker image to the GCP Container Registry.

Then we are ready to deploy the Cloud Run service

And because we love benchmarks:

Is serverless always the right answer?

No, leaving cost aside there are certain things you can't do or can't do well:

App Engine, Cloud Run and Cloud functions all come with a pretty good free tier and you pay only when you use them.

Being full-fledged applications you can pack them into containers and run them somewhere else.

They are also well integrated with the Stackdriver products (now Operations), that means you get centralized log and monitoring out of the box.

And yes, you can use structlog and get you json logs parsed, just remember to convert level to severity (check this snippet).

App Engine and Cloud Run both support traffic splitting between different revisions, so you get A/B testing or canary deployment for free.

Cloud functions are also great but they force you writing web applications in a way that I don't like.

But I do love using Cloud Functions for event-based systems, data ingestion or pipeline based on events.

Do you want to write production-ready applications on Kubernetes?
Check the course

Boost your Python and DevOps skills

Get great content on Python, DevOps and cloud architecture.